The Launch of The Hoosier Wander(er) 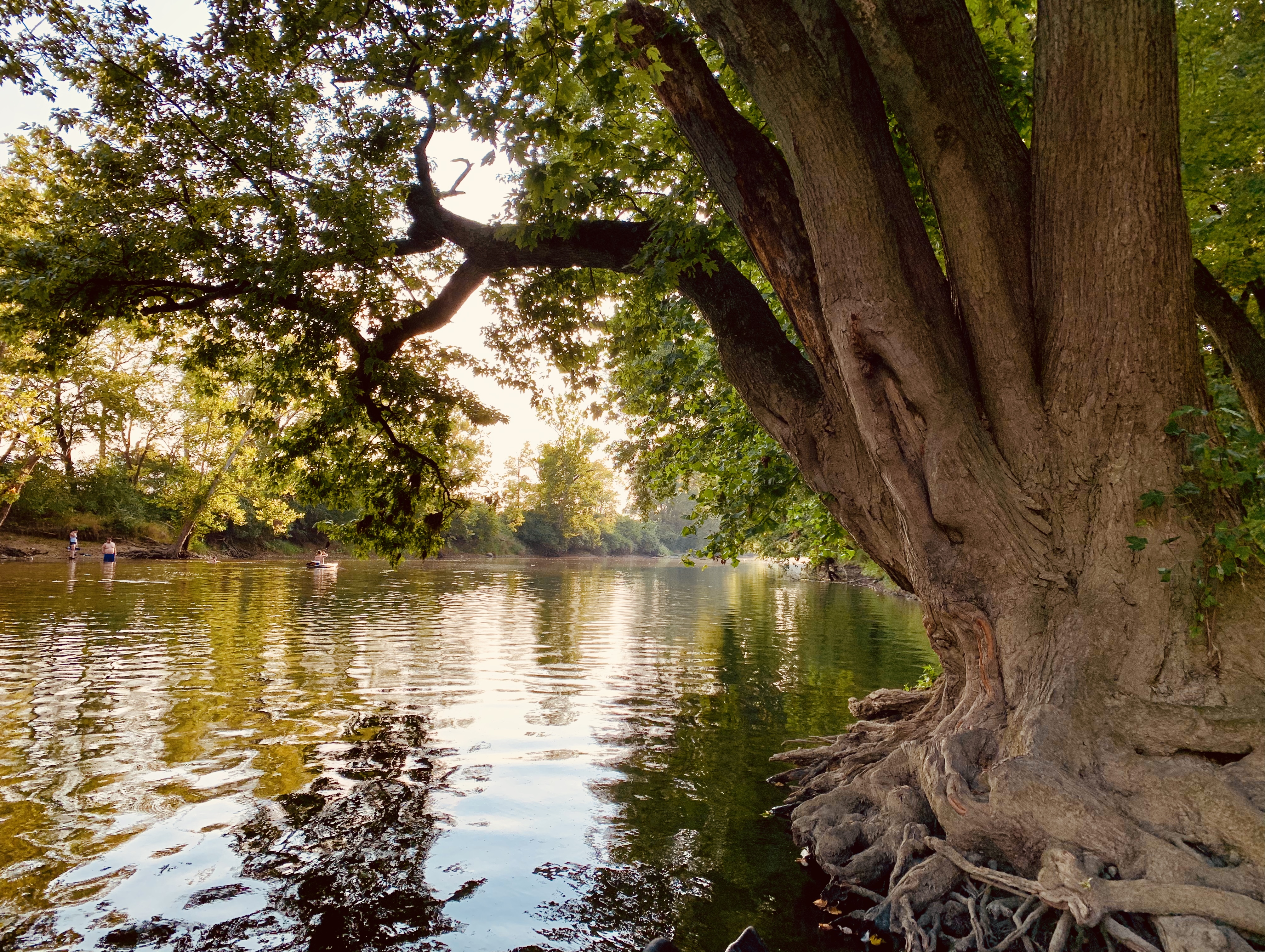 Fifteen years ago, I turned to the White River to provide a much-needed escape from life’s daily stresses. In the article reprinted below (with permission from the Anderson Herald Bulletin), I wrote, “If my life is a musical instrument, nature continually demonstrates that it is the master technician that puts me back in tune.”

While I’m happy to report that my life is less stressful—at least at the moment—I still turn to nature and the White River to keep my life balanced. I’m also happy to share that I’m returning to an even bigger adventure on one of Indiana’s best waterways.

This August, I’ll be launching, quite literally, The Hoosier Wander(er). This outdoor blog will be sponsored by RLTurner Corporation and featured on the Indiana Parks and Recreation Association’s website with me as the host. Through this great partnership, I will canoe down the White River, from Southwestway Park on the south side of Indianapolis, to the river’s terminus at Mt. Carmel, Illinois.

The adventure will cover 225 miles in 10 days and will celebrate the beautiful flora and fauna along the way. Daily blogs, complete with photos and videos, will capture the allure of the outdoors and showcase the joys, challenges, and anxieties of a solo trek.

Upon completion of the trip, I’ll produce a series of videos to showcase the parks and amenities that invite people to enjoy the White River. I’ll also promote Blue Ways, existing and proposed parks and access points that create trails of rivers and streams.

I’d like to use this article as an invitation to virtually join me on this journey. It will be the first of many that will take me from Indiana’s meditative waterways to adrenaline-filled mountain bike trails, and from colorful fields of spring wildflowers to fall skies filled with migrating birds.

RIVER ESCAPE: AN ADVENTURE KAYAKING THROUGH INDIANA (Featured in the Anderson Herald Bulletin on Oct. 23, 2007)

“When the fog of human voices grows too thick for my lungs, and the ticking of my own inner clock rattles my soul, and I feel the winds of momentariness whistling through my ribs, I go out to climb a cliff or splash down a stony creek bed or dangle my legs over a quarry’s lip,” wrote Scott Russell Sanders in Stone Country.

While Sanders has the benefit of living in Bloomington, with an abundance of cliffs and quarries, I had to find an alternative to quiet my inner clock that was ticking as loud as Poe’s telltale heart.

Even at the height of this summer’s drought, the White River proved to be the perfect elixir to stretch my muscles and untangle my thoughts.

RIGHT IN YOUR BACKYARD

Ask most Muncie residents to name the area’s best natural resource, and they’ll respond, “Prairie Creek Reservoir.” Most will overlook the natural body of water that runs right through the heart of town. Most days this fact would make me sad. On this weekend, however, the mass of humanity ignoring one of the state’s most prominent rivers sounded most appealing.

As always, my adventure began with reviewing and copying maps from my favorite adventure book, DeLorme’s “Indiana Atlas and Gazetteer.” (Truth be told, the number of trips I’ve imagined with books of maps far exceed the ones I’ve actually taken.)

Last year, I was able to paddle my kayak from Muncie to Mounds State Park in six hours. So, I thought, if I left on a Friday night after work and knocked off a few miles, I could make it to Noblesville by the end of the weekend.

My kayak is small, so I really had to pare down my pack list. Luckily it was warm, so I could get by with a sheet rather than a sleeping bag, a sleeping pad, a change of T-shirt and shorts and one long-sleeve shirt, just in case, all tucked inside a dry bag. For food, I threw in a jar of peanut butter, a bottle of honey, a loaf of bread, a couple apples, a few other snacks and three quarts of water.

Since the forecast held a chance of rain, I also packed a small pup tent. To feed my writing jones, I packed my journal and Jon Krakauer’s “Into the Wild” (seemed apropos, though I was counting on a more positive outcome). I also packed a digital camera and a headlamp.

My wife and son were nice enough to give me a ride to the river just below the city’s last dam. After a couple of obligatory snapshots to document the beginning of the “historic” journey, I pushed off into the shallow waters.

Within the first hour of paddling, I was already questioning why I decided to take this trip in the middle of a drought. I had to walk at least three rapids and do a kayak “butt scoot” through three more. By the time I passed Yorktown, the sound of the marching band nearly lured me to abandon my trip, take in the game and hit Mr. Mouse afterward.

Once through Yorktown, the river began to get deeper and easier to run. Three hours of paddling and two steel bridges later, I was in Daleville. I now had a decision to make: camp on a bank or push on in the dark to Mounds State Park. A rock that jumped out of nowhere (I swear) made the decision for me. It tipped me just enough to get my clothes wet, so I took it as my sign to quit for the day.

I pulled up to a rocky bank, pitched my tent, changed clothes and attempted to sleep. The seemingly endless parade of trains passing nearby seemed intent on keeping me awake. An occasional raccoon brushing against my tent trying to steal my food also roused me throughout the long night. The one time I didn’t mind being awoken, however, was when a great horned owl called out from a nearby tree.

The next morning saw me rise from my rocky mattress stiff and achy well before the sun arose. (I’d had enough!) When the sun finally did come up, I had already struck camp, breakfasted and paddled an hour downriver. Two hours later, I arrived at Mounds State Park.

Just past the park, I stopped for an early lunch of peanut butter and honey sandwiches. Although I was weary from little sleep, flowing along with the river beneath a canopy of sycamore, oak and maple trees and startling many great blue and green-backed herons, I began to unwind.

The river was flowing slowly, but it subtly erased my tensions. By the time I paddled out of Anderson, I was completely relaxed and thoroughly enjoying the trip. I was even ready, dare I say, to looking forward to sharing my experience with others.

And it’s a good thing, too, because after I paddled beyond city’s suburbs I began to encounter other paddlers. One boat held a father fishing with his two sons; another carried an older couple heading to a cookout further down river.

Unlike the majority of local residents who consciously ignore the White River, these people embrace it. These weren’t water newbies; they were river regulars. Travel time, I quickly learned is measured in hours and bridges.

“How much further is Perskinsville?” I asked.

“How far is Hamilton?”

When I arrived at Perkinsville (accurately forecasted as two bridges and four hours), I saw a tavern nearby. There was also a hog roast and a makeshift campground in the park. Just for passing a message from a canoeist, I was given a cold beer. When I inquired about staying for dinner and camping, though, I was informed that the tickets for the hog roast were sold out, and the campground was full.

Undeterred, I walked up the hill to the “tavern.” It turned out to the sought-after dinner destination of Bonge’s. I asked about getting some takeout, but the hostess informed me that they were so busy that they had time only to care for their sit-down customers. She did, however, agree to fill my water bottle. As a bonus, she returned with a container of ice water and some jalapeno cornbread!

Even though I was exhausted, the beer and cornbread lifted my spirits enough to carry me to a small island about an hour beyond Perkinsville. The soft sand proved to be as comfortable as any hotel bed.

I slept all night, awakened only once (and with a smile on my face) by two screech owls calling to each other. I slept in until 7:30 a.m. just as refreshed if I had risen from my own bed. After a quick breakfast of an apple and a granola bar, I pushed off to start the day.

While the White River seemed to twist and turn between Anderson and Perkinsville, time (and bridges for that matter) passed slowly. Beyond Perkinsville the river is straighter and travel is somewhat speedier. Bridges seemed to pass in reasonable spans of time. Checking my map, I could see that I was making real progress.

Near the town of Riverwood is the largest dam on the trip. The water is deep enough for pontoon boats and jet skis. I was even passed by a hovercraft.

The pullout for the dam on the west side of the river is a small ramp that leads to a concrete walkway. The path makes for a smooth portage around the dam, but schlepping my load was enough incentive to take a long break and an early lunch.

Just outside of Noblesville, I passed beneath Potters Bridge, the only covered bridge along the route. After taking a quick photo of the bridge, I paddled the final stretch.

Inside Noblesville’s city limits, I called a friend (yes, I packed my cell phone) and arranged to be picked up just under the Indiana 32 bridge.

STEPPING INTO ANOTHER WORLD

The steep bank out of the river was a short walk, but it felt as if I was transported to another world. Suddenly my view was not of water, trees and herons, but of asphalt, cars and people — ones who measured distance by minutes and miles, with their destination as the goal and travel being the inconvenience.

Sure, it’s a cliché that a river is life. But it’s true. There are shallow rapids that cause you to question your motivation; there are soothing deep, canopied sections where hours and bridges pass easily; and there are blind sections leaving you unsure of what which channel to choose.

While I’ve often repeated the river is life cliché, I added another truism on this weekend trek. If my life is a musical instrument, nature continually demonstrates that it is the master technician that puts me back in tune.